Cross-posted from Tumblr. Originally posted May 2012. 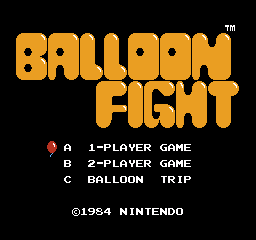 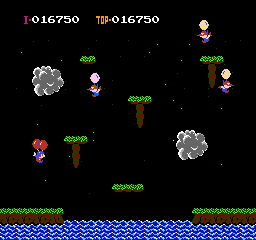 The single player goes like this: you flap around and pop the enemy’s balloons. The enemies float down and you knock into them again to take them out. You go from level to level racking up points, and the levels eventually go into an endless loop. The levels also loop around themselves horizontally (so, you go through the left side of the screen and appear on the right). There’s a little more to it than that but I’ll leave it there.

So what happens with the 2-player option? Well when you select that option, you get this: 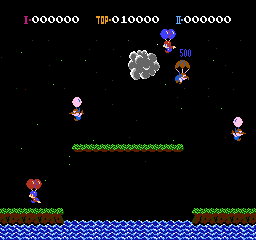 WOWZA it’s two balloon fighters!! And… that’s about it! Both players go through the regular single player game, and both players are capable of popping each others balloons. Once one player loses all their lives, the other player can still keep going.

And when you take out an enemy, a bubble slowly rises up from the water below. Popping this bubble gets you bonus points. So if one player takes out an enemy, the other can effectively “steal” the other’s bonus points. This is pretty similar to the coins that come out of the pipes after taking out enemies in Mario Bros… actually, all of this is pretty similar to Mario Bros come to think of it. 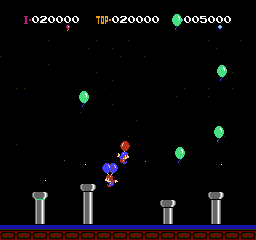 This seeps into the bonus rounds as well. Here, balloons randomly float out from the tubes and you have to pop them all to achieve the “perfect score” bonus. Here, you can cooperate to try to pop all the balloons, or you can compete to see who can pop more. Or both at the same time!

It’s all very simple, yet robust at the same time. It comes together quite nicely and makes up one of my favorite early NES titles.