After doing my stupidly exhaustive and longwinded article of Halloweenish NES games, I figured it was time to move on to the console's lesser loved step-cousin, the Sega Master System. A bit of a flop in the US and Japan, the console did see significant success in Europe and Brazil. Though it doesn't have the gargantuan library of its competitor, the Master System has its fair share of spooky games to look at. Hope you like Draculas. 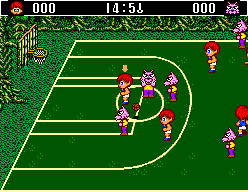 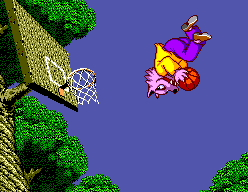 Have you ever wanted to play basketball... with monsters?!? Basketball Nightmare allows you to make that dream a reality!

A full 5-on-5 game of dunks and scares. Hoop it up with Draculas in spooky locales like dark forests and cemeteries. But the coolest thing about the game is the zoomed-in dunk animations, perhaps inspired by Konami's Double Dribble.

The selection of monsters is oddly Japan-centric for a game only released in Europe and Brazil. Sure, you have your classic werewolves and... vampire magicians... but you also have kappa, tengu, hitotsume-kozou, and little zombie oba-chans.

It's certainly not the smoothest-playing rendition of basketball for the era, but the gimmick is charming enough to be worth a go.

What if Alex Kidd was stuck in a haunted house? That's the important question Ghost House asks. Wander around the mazelike mansion of Count Dracula as Mick, who has inherited his family fortune... stored in Dracula's mansion.

The house has multiple floors, multiple doors, and loops around on itself endlessly. Doors take you all over the place, and you won't know where until you try it. Punch bats and collect keys and treasure to find your way to each level's exit. Jump on flying daggers to collect them and stab ghosts.

An early release, the game is a bit simplistic, but it's not bad. It seems to be based on a little-known 1982 Sega arcade release called Monster Bash. 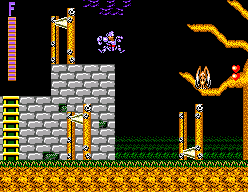 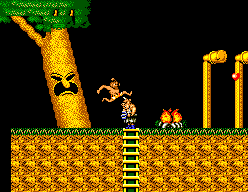 Due to Nintendo's draconian policies in the 80s, publishers of games for Nintendo systems weren't allowed to publish games for any other console. Sega would get around this by licensing the games from the rights holders and handling the porting and publishing themselves. Thus we had Capcom games as developed by Sega.

Ghouls'n Ghosts for the Master System is one such game. Though it naturally doesn't stack up to the Genesis port (programmed by Yuji Naka!), it certainly holds its own againt the janky NES conversion of its prequel, Ghosts'n Goblins.

If you're familiar with this series, you already know this game is tough. But it at least gives you more of a fighting chance than the first game did. This version's a bit on the sluggish side, but maybe that'll help you out in the long run.

They're creepy, kooky, mysterious, spooky... you know the deal.

A ho-hum platformer based on the live action movie and released exlusively in Europe. This game also appeared on the NES, among numerous other systems -- mostly Euro PCs.

Gomez has to rescue each of his family members from... his own home? Run back and forth, collect items, and unlock doors. There's no continues and no invicibility frames after being hit. A pretty difficult game that's probably pretty easy once you know the proper route through.

The singular rendition of the Addams Family theme song that plays throughout nearly the entire game will probably drive you mad before you get to that point, though. 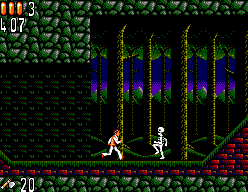 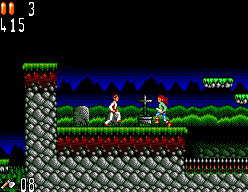 Another game that also appeared on the NES and several others. Based on the live action movie, Bram Stoker's Dracula is a pretty straightforward platformer. Run, jump, get items from strangely familiar question mark boxes. The controls are pretty good. The music's a bit of a cacaphonious mess, but the game ain't bad.

Remember to hold "down" when jumping to break through certain floors. Otherwise you'll be stuck within the first 10 seconds. 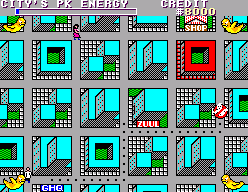 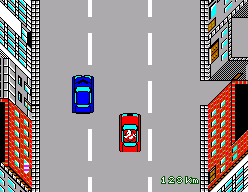 A conversion of David Crane's (of Pitfall fame) 1984 computer game. If you're familiar with the godawful NES version, you'll be familiar with this. Thankfully, the Master System release was handled much better. Supposedly, it's even considered the definitive version of the game!

...However, I still don't have the patience to figure out how to play it, so that's all I have to say about that. 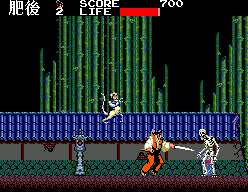 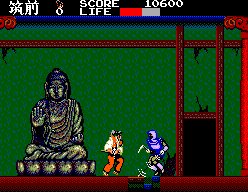 Kenseiden is a hack-n-slash action game that follows Hayato as he travels though ancient Japan in search of his legendary sword.

At first glance, it may seem like a simple action game similar to Shinobi. However, you'll soon find that it's not exactly linear. There's plenty of exploring and backtracking needed in each level to unlock the path through. There's even branching paths between levels to take into consideration.

This game is tough, bombarding you with creepy-crawlies from all directions. Hayato is pretty slow for a samurai, so keeping your enemies at bay can be a challenge. But there are upgrades to find as you travel, so that's nice.

The game even supports the FM Sound Unit for some hearty FM music, if you can get that going.

Overall, this is a pretty ambitious game that is sort of like a prototypical "Metroidvania". If you want a spooky game with classical Japanese flair that you can really sink your teeth into, it's not a bad choice! 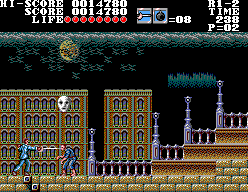 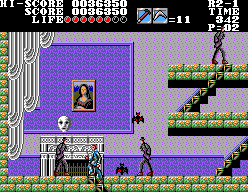 The Master System may not have had a Castlevania, but what it did have was... this! Master of Darkness is a game of many names -- titled In the Wake of Vampire in Japan, and combining those into Vampire: Master of Darkness for the US.

Make no mistake, this is a Castlevania clone through and through. You'll instantly recognize it as soon as you start climbing stairs and stabbing floating floating for items. And, y'know what... it's pretty great too!

This game has everything you love about classic Castlevania. Deliberate platforming, sub-weapons, and even wall meat! Well, wall health vials at least.

A must-play for anyone looking to explore Sega's 8-bit library. The Master System version was only released in Europe and Brazil. However, it also got released everywhere else on the trusty Game Gear. (And that version was also released on 3DS.) 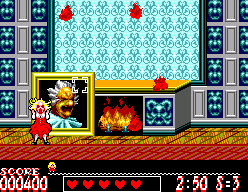 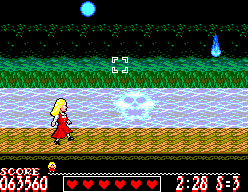 Laser Ghost is a peculiar rail shooter, released only in Europe. Typical games of this type tended to star muscle army duded gunning down soldiers in nondescript warzones. This one stars... a helpless little girl.

As a ghost hunter, you have been telepathically contacted by Katherine, a girl whose soul has been trapped in the "ghost city". She needs your help to escape! Katherine walks slowly through each level, and it's your job to protect her from the spookies that try to harm her. You can shoot up background elements to get powerups to help you out.

The d-pad controls are a little strange. The crosshair constantly wants to recenter itself, making aiming a bit of a pain. However, there's also the option to use a light gun (paired with a controller)! This may or may not be a better experience... good luck trying to get that experience authentically these days.

As far as I'm concerned, this is the most quintessentially spooky game on the Master System. It's not the best--it's actually kinda janky--but it hits all the right Halloween notes. And y'know what, that's good enough.

So, there you go! Nine spooky Sega games to get your spook on this holiday season. Have fun, happy gaming, all that stuff, bye!!